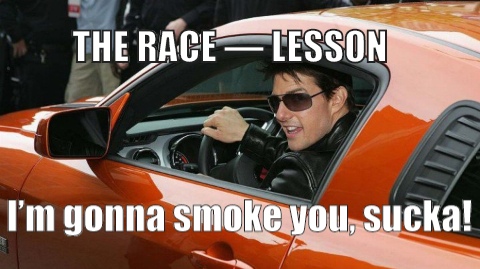 we sometimes say, you know — he’s going up the street or he is going down the street and sometimes that means Maybe going up a hill or down a hill  sometimes it means you’re North and South, you know if you’re going up the street it might suggest you are going north on the street  if you say — go down Van Ness, it might mean go south on Van Ness or it might mean go down the hill  you’re at the top of Van Ness Street and you’re going to go down meaning down a Long Hill  so that’s why we say sometimes — to go up or go down a street, hear it, means going down a hill  then that’s has a big hill, so Allen is at the top of the hill and he is riding down on Van Ness Street  sometimes we say traffic light, but sometimes we say stop light, the same they’re both the same stop light or traffic light   Ferrari is a very fast car made in Italy  I think most of you probably know, what a Ferrari  probably   idea that you, you you come next to them, you were behind them and then you come next to them  so you can imagine, someone is at a stoplight and another car comes from behind and then comes and stops next to you or next to the person  idea, of coming from behind to the side, so from behind to the side of someone, so a red Ferrari pulls up next to Allen comes from behind Allen and then stops next to him  anyway this is another two word verb, looks over, to look over  that you look to the side, right, you’re looking sideways not in front of you  sideways   you say -look over. you’re not looking to the front, you’re looking to the side, right, so they’re next to each other and then they look to the side   next to each other  the driver turns his head to the side and looks at Allen  to sneer — means to move your mouth and look kind of angry  right, it means you maybe only one side of your mouth goes up, it’s kind of a half smile, so maybe the left side of the mouth goes up  you’re on your on means -I agree with you or it means I will do it, I will do what you said, I agree to do something  usually we use your on for a contest for competition for some something, where one person will win and another will lose for example a race, kind of difficult thing  for example if you say — AJ I will give you $100, if you swim 10 miles. right I will give you $100 if you swim 10 miles, and I say — I say it means — I agree I agree to do it  Tom says — I’m going to smoke you sucker — this is slang of course slang means — going to the future future tense.  in normal speech we don’t say: — going to we say: — gonna, because- I’m going to smoke you — I’m gonna smoke you okay to smoke someone — is slang it means to beat them it means to win against someone  so we’ll use it with the future a lot -I’m going to smoke you means — I’m going to beat you, I’m going to win and you are going to lose, that’s what to smoke someone means especially in a race  we use it a lot with racing,- I’m going to smoke you means — I will be faster, I will beat you  and then sucker, sucker or sucka two pronunciations sucker or sucka that’s so it just means it’s kind of a negative name for somebody  kind of a negative name for somebody  it’s a little bit like jerk or a…… but Sucka is kind of weak, it’s it’s not it’s a little negative just a little negative but not, not so much  so sukkah is a little bit negative, it’s not terrible. Terrible alright sometimes being a little negative  he says — I’m going to smoke you suck. Alan says — you wish you mean, meaning wish you would smoke me, you wish you will win it   Alan says — oh, your car is nothing, your car is bad, your car is cheap, your car is low-quality  engine is the motor for a car or motorcycle   the power for the car it’s, the power for the motorcycle   revving the engine  you push the engine so it goes fast, but you are not moving, right, so you’re pushing the gas but you also push the break, so no moving  that’s called revving the engine, revving the engine, you make the engine loud, revving the engine, is revving the engine of his Ferrari  Allen is revving the engine of his motorcycle and they are waiting for the light  take off means to start quickly, means to go quickly or to start very quickly  we use it for example when someone is stopped, their not moving, stopped and suddenly they move suddenly, they go we say -they take off  so, to take off — is to suddenly move or to suddenly start   I’ll take off has other meanings also, but here it means to start suddenly   zoom means to go fast easy, to go very fast  top speed means -as fast as possible it means — fastest  you must go over to the side, that you must stop your car  Tom laughing, he yells — better luck next time, better luck next time — is an idiom, it’s a common phrase we say it — a lot better  it’s similar to Good Luck, better luck next time is similar to good luck what’s the difference of a difference better luck next time  we use after someone fails after something bad happens, we say — better luck next time, it means this time you failed, but next time maybe you will succeed, next time maybe you will do better