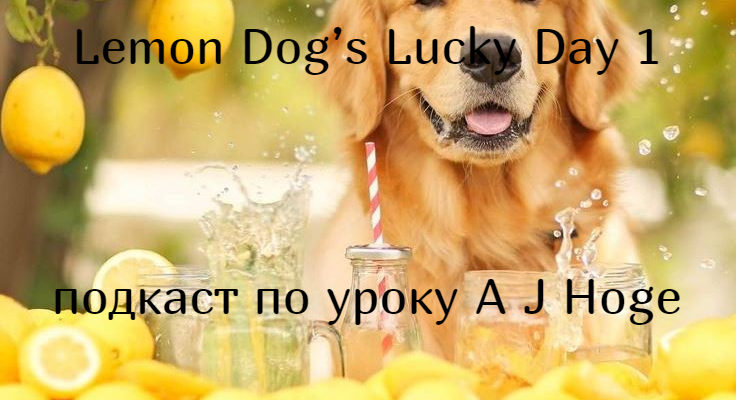 As a matter of fact he only eats food that is made from lemons.His mother is a bulldog and she raised him vegetarian. His father is asheepdog.He is supposed to protect the sheep but instead he eats them.He is nutty as a fruitcake!It turns out that when Lemon Dog was a puppy he only ate food made from pumpkinHis favorite was vegan cream of pumpkin popsicles.As far as making the popsicles vegan, his mother made them with soy milk.Lemon Dog wants to throw a party.He decides to stick with making everything from lemons.He really wants to make lemon soup, lemon sandwiches, lemon salad, lemon cake, and lemon pie. He needs to buy 36,000 lemons to feed his friends.He knows that they will love his party as long as all the food is made from lemons!He finds his keys and gets into his car… to be continued in Part 2!!!

he was naughty: он был непослушным
pumpkin popsicles: тыквенное мороженое
he was a puppy: он был щенком
vegan means no animal milk it means no cow milk — веган означает, что нет животного молока, значит, нет коровьего молока.
She brought him up to be vegetarianbrought up (фразовый глагол)
She taught him how to be vegetarianWhen lemon dog was a puppy, he only ate food made from pumpkin.It turns out thatWas it his favorite or least favorite?  It was his favoriteHis favorite was vegan cream of pumpkin popsicles as far as making the Popsicles vegan.but it could be soy milk

as a matter of fact: actually, in fact
raised him: parented, brought him up, taught
vegetarian: lacto-ovo vegetarian: eats plants, eggs, and milk. No meat, fish or flesh.
supposed to: should, ought to
nutty as a fruitcake: crazy, insane, “nuts”
turns out: to be found or known, to prove to be true
vegan: eats plants. No animal products such as meat, fish, flesh, eggs, milk or honey.
cream of: food or soup made with cream
popsicles: frozen juice, type of desert or treat
limessheepdog: овчарка
pumpkin: тыква
as far as: with regard to, to the extent or degree of something
soy milk: a type of milk made from soy beans
throw a party: have a party, give a party
stick with: to continue doing something, to not quit something
as long as: provided that, on condition that